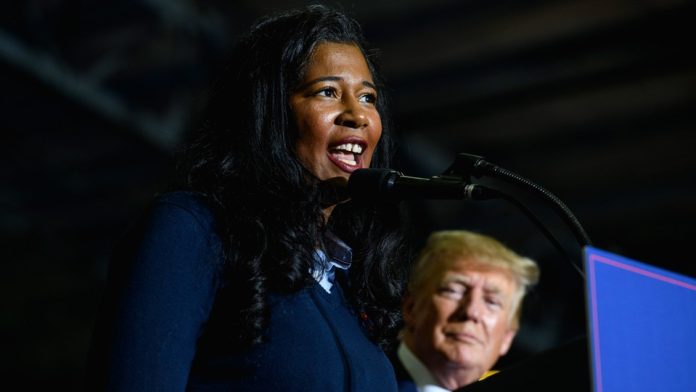 In the weeks after the 2020 election, one particular Michigan woman was trumpeting claims of fraud as loudly as she could. Kristina Karamo, a community-college professor who’d previously accused Democrats of having a “satanic agenda,” went on Fox News again and again to describe how illegal ballots supposedly had been tallied for Joe Biden at the TCF Center in Detroit, where she worked as a poll watcher. She testified before the State Senate that sacks of votes inexplicably had been dropped off there in the middle of Election Night. She suggested that Dominion Voting software had flipped Trump votes to Biden votes statewide.

None of what Karamo described actually happened—as far as anyone has been able to confirm. Her story served its purpose, though: Karamo has spent the past year campaigning to be Michigan’s next secretary of state. Some people might have dismissed her, at first, as just another down-ballot conspiracy kook with no chance of winning her party’s primary. But last month, the Michigan Republican Party chose Karamo as its nominee. Barring any changes at an upcoming convention in August, and with Republicans poised to have a strong midterm election year, Karamo has a shot at victory in November.

Michigan’s next election chief, in other words, might be one of its foremost election-conspiracy theorists. And what happens in this swing state in 2024 could tip the entire presidential outcome. “One thing the last six years has taught me is you never say never,” Jeff Timmer, a former executive director of the Michigan Republican Party who has been highly critical of the GOP’s new direction, told me this week. “Crazy is powerful, and it doesn’t get tired.”

Donald Trump is the main reason Karamo has gotten this far. The former president endorsed her, as well as Matt DePerno, another election-fraud claimant and the GOP’s nominee for state attorney general. Trump also has backed 10 state legislative candidates in Michigan—more than in any other state—and a handful of congressional candidates, too. His involvement in Michigan is quite clearly rooted in a desire to establish a more reliable foundation of support than he had in 2020: Two years ago, the people who voted to certify Biden’s victory were members of Trump’s own party; the State Senate investigation that found no evidence of widespread fraud was led by the GOP; and the two congressmen from Michigan who supported Trump’s impeachment were both Republicans. Last election, Michigan’s GOP leaders did not bend to Trump’s will. Next time, he hopes, they will.

Karamo would be a key part of Trump’s new line of defense. The 36-year-old single mother of two from a northern suburb of Detroit has degrees in communications and Christian apologetics, according to her campaign website, and teaches public speaking and a class on college orientation at Wayne County Community College. (Karamo did not respond to multiple requests for comment, nor did her employer.) She previously worked as the communications chair for Oakland County Republicans and was on Right to Life Michigan’s Black leadership committee.

Despite never having held elected office, Karamo already has proved to be an enthusiastic brawler in the GOP’s culture war. On her theology-and-politics podcast, which she appears to have launched in 2020, Karamo has endorsed the conspiracy theory that left-wing anarchists were behind the January 6 attack on the Capitol. She has warned listeners about “conservative imposters” within the Republican Party, declared herself an “anti-vaxxer,” and called public schools “government indoctrination camps,” according to a CNN review. More integral to Trump’s goals, though, is that Karamo has never backed down from her allegations of fraud, despite the State Senate investigation and multiple state-run election audits. She’s said that Trump, not Biden, is the real winner of Michigan—and the election.

Karamo has more “fire and passion” than any other candidate for the job, Billy Putman, the chair of the Tuscola County Republican Party, who has endorsed Karamo, told me. He expects that as attorney general, DePerno would investigate supposed illegal activity in 2020, and Karamo would make sure that no fraud occurs going forward. “She’s a woman of integrity, and she’ll uphold the office to a code of ethics that I don’t think has been held to,” Putman said.

In Michigan, secretaries of state are nominated during a state-party convention, and Karamo benefited from a transformed Michigan Republican Party, which has been overtaken by Trump loyalists. The new co-chair of the party is Meshawn Maddock, who in 2020 tried to seat a slate of fake Trump-supporting electors and was at the January 6 rally in Washington, D.C. Some anti-Trump donors and esablishment political leaders have pushed back against this shift in recent weeks. But it’s too late, others argue. The transformation is complete. “The best way to describe [the Michigan GOP] is the Pridelands once Simba is gone and Scar and the hyenas have taken over,” Timmer, who also is an adviser to the anti-Trump Lincoln Project, said.

Not everyone thinks that Karamo, as secretary of state, would try to sway the election. “There are going to be so many eyeballs on how this next election is conducted, the opportunities for chicanery will be limited,” Jason Cabel Roe, the state party’s most recent executive director, told me. Plus, he said, just look at Georgia Secretary of State Brad Raffensperger, who told Trump to go pound sand when the president asked him to “find” 11,000 votes. Others say that the Raffensperger scenario is the one they fear most—that Karamo really would try to find extra votes, or maybe try to seat an alternate group of electors to help a Republican win. “Without question … she’ll use her office,” Timmer said. “They want to throw a wrench in the process, create chaos, and muscle through the results they want.”

Karamo has steep competition for the job: her Democratic opponent, Secretary of State Jocelyn Benson, who emerged as a kind of prodemocracy hero during the 2020 election. A January poll showed Benson leading Karamo by 14 points in a head-to-head matchup, and Benson’s campaign has reported roughly $1.7 million cash on hand, compared with Karamo’s $230,000. “Benson is going to link her to Trump every chance she gets, talk about the Big Lie, how she oversaw the safest election in Michigan,” David Dulio, a political-science professor at Oakland University, told me. On Thursday, Benson told NBC News that after the 2020 election, Trump suggested that she should be arrested for treason and executed; the Trump team accused Benson of lying.

However, Benson made some moves in 2020 that many Republicans are still angry about, including sending out unsolicited absentee-ballot applications to millions of Michigan voters ahead of the election. And Karamo will be on the ballot with other state Republicans, giving her the possible benefit of straight-ticket voting in an election year that favors the GOP. She can win if the conditions are right—especially if inflation is still plaguing the country on Election Day or if there’s another COVID spike. “I think both [Karamo and DePerno] will slightly underrun the Republican candidate for governor,” Matt Grossman, a political-science professor at Michigan State, told me. But “their chances are pretty good.”

Even if Karamo doesn’t win, she and the other Trump-backed nominees are quite likely only the first wave of antidemocratic candidates and conspiracy theorists to crash into Michigan. The Republican base and its statewide leadership look different than they did six years ago, and the requirements for political success have changed completely. That’s also true in other swing states, from Pennsylvania to Arizona, and American politics is just beginning to grapple with the consequences.

Early last month, Karamo addressed an audience at the Four Winds Church, just outside Detroit. Standing on the stage in front of a rolling slideshow depicting major moments in American history—the election of Ronald Reagan, Desert Storm, 9/11—she implored people to help defend the country from tyranny. “Every person in this room is aware of the corruption in the 2020 election, but we can’t just whine and bellyache,” she said. She passed out applications for people to become election workers, and encouraged them to run for office—just like she’s doing. Don’t let anyone convince you that you’re not qualified, Karamo told them: “Get involved, and encourage your friends to get involved, to save our republic.”

Iran is still waging war on the victims of its crackdowns

Flooding and wreckage in Detroit expose the city’s climate vulnerability