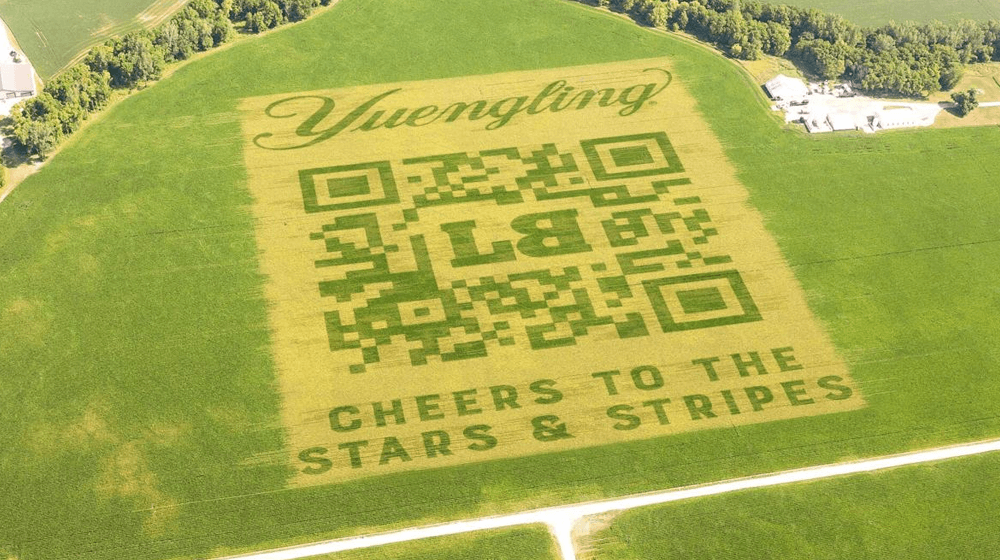 D.G Yuengling & Son Inc. the oldest brewery in America, has unveiled the world’s largest QR code grown from crops. The QR code is approximately ¼ mile in length and ¼ mile in width, equating to around the same length of 20 football fields.

The giant QR code has been created in recognition of the farming industry, which plays an integral role in beer production.

To grow the world’s largest QR code from crops, Yuengling teamed up with Chalfant Family Farms, a family business in Farmland, Indiana. The crops were planted in May 2022.

A one-of-its-kind version of the brewery’s iconic Stars and Stripes QR code is currently appearing on special cans of Yuengling Lager.

Businesses Are Thinking Outside the Box with QR Codes

The story highlights how businesses are getting creative with the use of QR codes. Quick Response (QR) codes have been used by businesses for years, to help engage with customers while making it easier to access information about their products or services.

From magazine adverts to on real estate signs, small businesses are becoming increasingly creative with QR codes to extend their reach to customers and create memorable and practical ways to convey important information.

Yuengling brewery is leading the way in generating creative QR codes to have a lasting impact on consumers.

The world’s largest QR code made from crops now features Yuengling’s limited-edition camouflage Team RWG cans. When scanned, fans unlock the opportunity to immerse themselves in a digital Stars & Stripes experience where they can donate to Team Red, White & Blue (Team RWB), and the brewery’s long-time veteran’s charitable partner. They can watch Stars & Stripes Brand Ambassador Lee Brice’s “More Beer” music video. Fans can then enter a competition to win tickets to see Brice on tour this summer and shop in the brewery’s virtual gift shop.

Sheryl Yuengling, a sixth-generation family member, explained the thought behind the QR code.

“This is a QR code like no other. As we enter the back half of the summer, we wanted to offer up a unique and fun reminder to support Team RWB and have some fun with Lee Brice. Today’s unveiling further highlights the brewery’s year-round campaign dedicated to supporting our nation’s heroes.”

Yuengling has been in operation since 1829. Production of Yuengling products is carried out in two breweries in Pottsville, Pennsylvania, and one in Tampa, Florida. The creation of the world’s largest QR code made from crops, which now features on special cans across the US until the end of the summer, enabling customers to immerse themselves in a digital Stars & Stripes experience, is a testament that when it comes to QR codes the possibilities are almost endless.

This article, “Pennsylvania Brewer Gets Creative and BIG with World’s Largest QR Code” was first published on Small Business Trends

How to Write a Grant